A Most Elegant Client 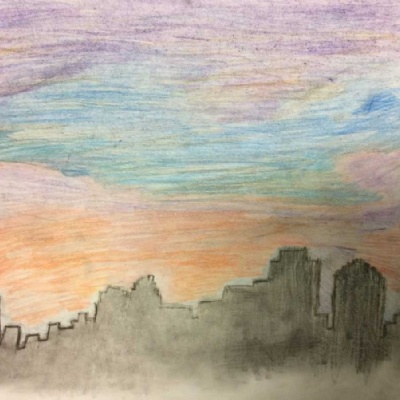 Daniel Martin, with part two of his dystopian short story.

The door was old: I should really get it replaced. When I worked as a young, good for nothing detective for the NYPD, the doors were new. They opened with a welcoming elegance. They’d only been put in a month or so before I joined the department, part of a refurbishment. I didn't like them. Too flashy for a police precinct. When I say, “I should replace it,” I mean with one of the same make. One of these sliding doors would be stupid. It would need a computer, and I don’t want a computer near my office.

Inside, the office is stuffy, the air thick, making the room feel smaller than it is. Right in front of the door, a wood table houses my secretary. Her desk is littered with all sorts of pictures in frames, family heirlooms, old client papers, and a used, battered typewriter. To the side of the table, on the floor leaning against it, is a large phone, which hardly rings. Behind my secretary’s desk, a door takes up most the wall, with a book shelf on both sides. The crowded and cramped room couldn’t get any more enclosed, until you realise that on the left side of the room are two chairs. Faint light trickled through the blinds of the small window. Normally, they were open, my secretary specifying that, “I can’t work with low light,” while I retire to my room, blinds shut, tight.

Before I’d even closed the door, my secretary had stood up, beaming through her teeth, “John, so good of you to turn up!”

When the door was shut, I noticed the immaculate, smartly dressed lady, who looked out of place. I almost started laughing. “Please Miss...,” I began to say before the lady spoke.

“Alright, Miss Jackson, please just wait in my office, and I’ll be with you in a minute.” She did as I said, as I hung my hat and coat on the hat stand to the right of the door. “John, were have you been?” my secretary glared, angry, and tired.

“I fell in the water at Central Park.” I replied walking past, to open the door into my room. She hit my arm as I went past. I felt my face forming into a smile, as I shut the door behind me, causing a cloud of dust.

My room was a little bigger than my secretary’s. I have a smaller desk, but a bigger window. The room is made smaller by the filing cabinets full of past clients and case files. It’s small, but homely.

“So, Miss Jackson, what can we do for you?” I asked, taking my small note pad and used pen off the table.

“It’s a robot.” I sighed, deeply. “It’s…It’s gone missing, and…and it was, erm, very expensive. You know how much they go for.”

“Yeah, you got to have a bit to have one of those clockers,” I said, running an eye up and down. Since we had sat down, Miss Jackson had taken out a clean, white handkerchief, fiddling with it. She was nervous about something.

“Is there a Mr Jackson?”

“Please, Mr McDylan, can we get back to the subject at hand?” She’d stopped fiddling with the handkerchief, giving me a deadly glare.

“Alright, this robot, what’s it to you?”

“Ok? Is that all, or was there something else?”

“No!” The glare was back, “That was all. I found it more effective than a human servant.”

I waited a while before asking my next question, listening to the pounding of the rain which had begun to strike the window. I slowly wrote up notes, while shooting the odd eye towards Miss Jackson. “Is there somewhere I can begin, like did it have a place of its own, or did it stay with you?”

“It...it had its own place. On the outskirts of the city.”

“Apartment.” She didn’t take any time to think.

“Do you know the number?”

“The street?” I asked the question immediately.

“Ok. I’ll go there now.” I stopped my questions, noted the street, then asked, “And, Your husband? Do you know where he’s staying?” Once again, she stopped fiddling with the handkerchief, putting it back, neatly, into a pocket and gave me frustrated glances.

“I think he’s by the docks,” she replied after a thoughtful pause.

“In what part of the docks. Ro-town, or just on the outside?”

Noting her last phrase down, I rose from my seat. She rose too. “Thanks for coming to see us, I will just ask you to fill out a form with my secretary.” I gave a grin, showing that she should go into my secretary, before adding, “Oh...one last thing, Miss Jackson,” she stopped, and elegantly turned. “What’s this clocker’s reference number?”

She didn’t stop to think before answering, “RF218, an X mechanics model.”

“Thank you, Miss Jackson.” The grin was back. She left the room, shutting the door, causing a cloud of dust.