Tom Dipple, with a report on the House Championship.

Throughout the school year many house competitions have routinely taken place and the basis for many was sport.  Arranging teams of young sportspeople, the houses and their members have competed against one another time and after time.  Staff and students encouraging each other in equal measure, each of the houses have shown optimism and support for others even in the lesser of times, demonstrating the friendly house rivalry between all.

The first sporting competition, on the 20th of October last year, was for netball with 160 HP to be shared between the four houses.  Live updates were provided via the @SH_housechamp twitter page showing the support and enthusiasm of the games!  After a high-spirited lunchtime, the results were in.  With Ursa in 4th place (16 HP), Pegasus in 3rd place (32 HP), Draco in 2nd place (48 HP) and Orion in 1st place (64 HP), Orion were in the lead overall in the house championships.

The second of the sporting house competitions was a football tournament.  It began on the 9th of November and ended on the 15th of December.  The tournament involved games against the girls and boys from each year group, for each of the houses.  The 100 HPs were distributed according to the results: Draco in 4th place (10 HPs), Ursa in 3rd place (20 HPs), Pegasus in 2nd place (30 HPs) and Orion in 1st place (40 HPs). 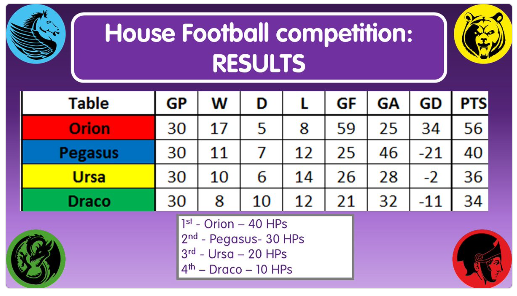 After this, badminton and hockey competitions ran alongside each other.  The outcome was unpredictable as houses persevered and pushed themselves to score and win.  After a long period of hard work, the results were announced on the 15th of February 2018.  Pegasus won badminton with 32 HPs, followed by Draco in 2nd (24 HPs), Orion in 3rd (16 HPs) and Ursa in 4th (8 HPs).  For hockey, Orion topped the leader board for the third time and scored 40 house points. Ursa were second with 30 HPs, Pegasus in third with 20 HPs and finally Draco with 10 HPs.

The next sporting competition to take place was basketball.  Beginning on the 12th of March and ending on the 26th.  Despite bouts of poor weather resulting in relocation to the sports hall, a new winner claimed victory: Ursa! They won 32 HPs from the 80-point competition. Orion came 2nd (24 HPs), Pegasus 3rd (16 HPs) and Draco 4th (8 HPs).

On the 4th of May an especially memorable sporting competition took place in the Sports Hall.  Four house teams of staff participated in the 20-house point competition.  All participants showed an optimistic attitude which created an exciting atmosphere.  As students gathered to spectate, the staff showed a positive, happy and united front whilst supporting some friendly competition.  Ursa were the winners!

All houses, staff and students, have taken an active role in allowing these sporting competitions to take place and the hard work and support of all should be recognised greatly.