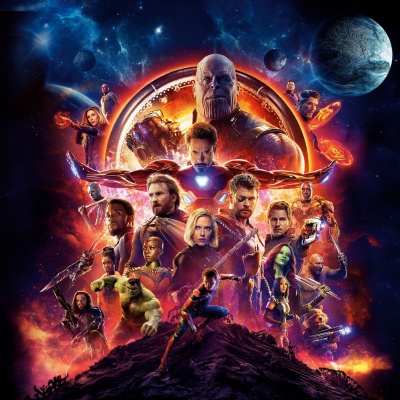 Hannah Forrest and Nelly Brown, on the new Avengers film.

The latest Marvel film, Avengers: Infinity War is one of the most ambitious comic book adaptations of all time. It brings together superheroes from all parts of the Marvel Cinematic Universe, uniting against the super villain Thanos (Josh Brolin) who is trying to find all six infinity stones and claim dominion over the galaxy.

As per usual the special effects and CGI (computer generated imagery) used by Marvel in this movie were spectacular.  Thanos, imposing in all his scenes, was created using CGI, and the movement and sound he makes brings this character to life: it’s a credit to animation team at Marvel.

After watching this film, I feel that there is a lot of explaining to do in the still un-named 2019 sequel.  The plot twists were without end, but that’s expected with uncountable super-heroes in just the one film (even the cast and directors don’t know how many comic book characters there were).  All the fan favourites return: Iron Man (Robert Downey Jr), Captain America (Chris Evans), Thor (Chris Hemsworth), Black Widow (Scarlett Johansson) and newcomers Spider-Man (Tom Holland), Scarlet Witch (Elizabeth Olsen) and Black Panther (Chadwick Boseman); but that’s just naming a few.

Critics mostly agree that Avengers: Infinity War will satisfy fans and reap huge numbers at the box office.  Whilst I was sat in the audience I could not see a spare seat in the house.  Box office analysts are predicting Infinity War could even break the $248 million (approx. - £180 million) opening weekend record set in 2015 by Star Wars: The Force Awakens - sorry Star Wars fans!

A tradition with Marvel films are the post credit scenes, sometimes just as a funny reward for sitting through the credits, others (like the post credit scene in Avengers: Infinity War) are clues to up-coming films, which gives Marvel lovers a chance to guess at what or who is coming up next.

If you’re looking for a great movie to see this summer term, then this is it.  But be warned, you’d better get your tissues out, because there are a couple of sad moments in Avengers: Infinity War.  But don’t worry, as with all Marvel films the humour is still in there by the bucket load.