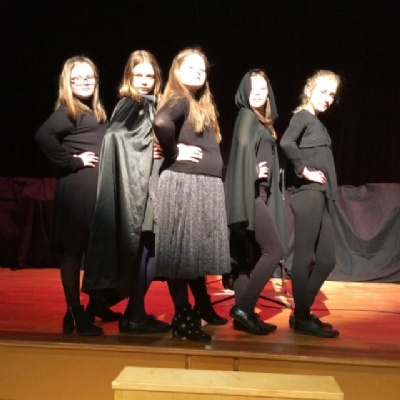 Charlie Jeavons, reporting on a day of Shakespeare inspired events.

To mark the occasion of Shakespeare Day, the Summerhill English Department went all out to honour one of the greatest writers in history!

On Monday 23rd April, many activities took place to celebrate the writer's success.  Shakespeare was believed to have been born on the 23rd of April (though records are unclear) but he was baptised on the 26th, and died on the 23rd, at the age of 52.  At the age of 18, he was married to his wife, Anne Hathaway, with the first of his three children on the way.  He led a successful life, writing 37 plays, 154 sonnets and many poems, as well as having his pieces performed for Queen Elizabeth I.

To start the day, Orion house were treated to the first of a week of performances on stage and the actors did not disappoint!  The inspirational group of Year Seven students performed the incantation of the witches from Macbeth making both the Performing Arts department and the school proud.  We want to say a massive well done to the witches: Grace (OCH), Grace (UCB), Ellie (DDH), Ella (ONS) and Emily (UMH).  A lunchtime audience was treated to a performance from Fanny Polgar and Abigail Rich as well: it was truly phenomenal!  Thank you for your performances throughout the week.

The English Department put in a lot of effort when it came to their innovative costumes such as King Duncan and Macbeth. This truly shows the dedication and creativity that they have to offer!  Summerhill radio also honoured the playwright on Monday, in a special tribute broadcast throughout the school.