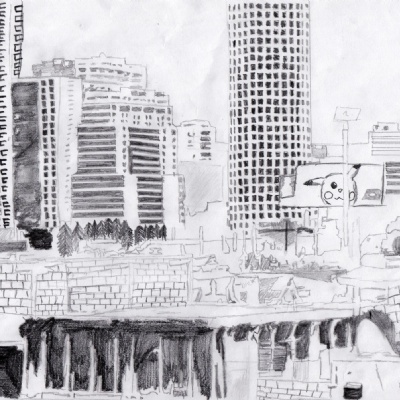 Daniel Martin, continuing his bleak tale of a flooded world.

The trip lasted forty minutes or so. Looking round, there were one or two wiring robots, but for the first half an hour, the tram car was packed with frustrated, tired New Yorkers.  As I came closer to the docks, and Ro-Town, the tram started to empty. It was a few other humans and me on the journey, but mostly it was robots filling the stuffy air with whirring, mechanical noise.

The tram came to an abrupt rattle stop at Ro-towns only tram station. The smell of oil lingered in the air and a constant hum reached the ear. Being the most industrial part of the city, Ro-town had a thick cloud of grey smoke, lingering low. The narrow streets meant that traffic could only move in one direction, not that there was much. Second floors of buildings stretched out across the street, creating a brickwork canopy. Most of the buildings of Ro-town were smaller than the rest of the city, so the over water tram station gave a view of the district.

I descended the metal stairs, down onto the dark, dingy streets. A few metres down and the tram station was out of view, being masked by the buildings. The enclosed street felt like I’d walked into a long, winding room. Heaps of broken, mangled clockers sat, leaning against walls, across the whole sidewalk. I looked up, seeing a small slit between the buildings, vertically over the street, where waves of rain poured through. A boat sped round the corner, throwing murky water on the walls. The whole street had little light, a neon sign casting a blue shadow that ran up and down the street. It was a sign that had been there before the water. Even before Ro-town was the city's robot shanty. I knew I’d find him there.

It was the Ridgway Bar. Good drink, good company, and few robots. It was the centre of human activity in Ro-town, with almost no robots there for anything besides work. Miss Jackson had said her husband might be in Ro-town, where she should have said, “You’ll most likely find him in the Ridgway Bar down on Broad Street.”

With one look up and down the street, I entered, the doors mechanically sliding open. I glared at the doors as I walked through. I found myself in the familiar, enclosed lobby with a set of elevators, in better condition than my own, double doors with gold rims, handles and foggy glass. On the left of the rather fancy doors, a bulky, beaten clocker stopped me. “It’s good to see you again Mr McDylan,” it said in an artificial voice that almost made me wince.

“Wish I could say the same RG72,” I replied trying to peer through the foggy glass.

“Please, Mr McDylan, call me Joe. Would you like me to take your coat?”

“I’ll keep it with me thanks.” After proving that I had no weapons with me, RG72 opened the doors letting me in.

I walked into a large, red, and gold decorated room. A few steps rose to the bar, and on different levels were some seating. Above the bar, a giant gold chandelier shone light on the whole room. Taking off my hat and coat, I stopped RG72 and said, “Is a Mr Jackson here?”

“You see that man, at the bar?” I looked, seeing a man hunched over, in a pin striped suit, “that's him.”

RG72 closed the doors as I climbed the stairs, strolling over to Mr Jackson. I looked round. There were too many computers in Ridgway Bar for my liking. Music was played by a mechanical piano, that had a computer within, four robots that waited upon the customers and served drinks at the bar. I’m almost certain robots cook, and even the doors into the lobby were mechanical.