School of Rock: Our Journey 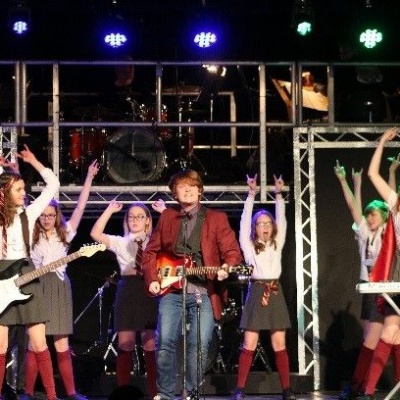 Harvey Dalloway, with an inside look at the show!

Last term, Summerhill’s Performing Arts department hosted a show-stopping, head-banging performance of School of Rock: The Musical on the 22nd and 23rd of March, receiving a standing ovation on both nights. Directed by Mr Reynolds, assisted by Ms Williams & Mr Bibby and choreographed by Ms Brothwell, it truly was an awesome experience for everyone who had the opportunity to be a part of it!

It all began with an auditioning process back in October, where everyone who auditioned had to prepare a solo song, as well as sing a group piece from the show and perform a brief dance routine.  From this, a cast was assembled, and preparations had begun.  A rigorous schedule of after-school rehearsals began straight after the Christmas break, along with lunchtime vocal rehearsals for soloists and ensemble members, whenever needed.

Spirits were higher than ever, when on February 14th we were visited by Joel Montague, a performer who’d played Dewey Finn in the West End production of School of Rock.  Giving everybody various tips and advice, his help brought us to the next level; we were more than an average school production.  After spending the full day with him, I believe his spritely attitude and eccentricity really helped everybody fit into their characters, especially myself.

The big night rapidly approached as rehearsals flew by, and soon enough it was showtime.  We began with a matinee show on the 21st of March, to an audience of students from local primary schools, which was met with great responses, yet we strived to do even better on the two following nights, and surely enough, we delivered!  Nerves were at a peak just before the show on Thursday night yet we still managed to rock our socks off, out-performing ourselves; but it wasn’t over yet.  After recovering from the night before, we were ready to perform again.  Friday’s performance was equally as good, receiving very similar feedback and critique as the Thursday – all of which was positive!  After giving it our all, we were treated to an after-show party, where we had one last chance to rock out as a family.  Many tears, shouts and sore throats later, it was finally over.

Although it was an undoubtedly stressful and tiring experience performing as Dewey Finn, it was a truly remarkable one, and I’d be lying if I had said I didn’t enjoy every minute of it, and I can’t wait to see what next year’s production has in store.