Rain Through the Window 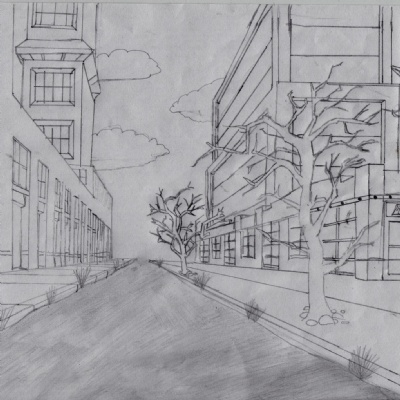 Daniel Martin, with part three of his dystopian tale.

I sat back down. Finishing up my notes, I poured a far from clear glass of water. I sat a while, listening to Miss Jackson and my secretary. The voices died away, a door shut, loud, confident footfalls down the corridor, and the rusty elevator plummeting down to lower levels.

Standing up, I exited the room.

“Now we need to talk about,” began my secretary, before I slowly put a finger to my lips. Standing at the window, I looked down at the street. Rain was slamming on the ground, then running off into the water. Every now and then, New York would be hit by a wave of rain. The water level would rise and the lower levels of some buildings would flood, but nothing too serious.

The pavement was littered with people, some running along, coat over their head, to try and find cover from the rain. Most just wrapped their coats tighter round their body. As I watched, the elegant figure of Miss Jackson walked out from the foot of the building, now with a far from water proof coat around her shoulders. She climbed into a bright, weather worn boat cab, taking off towards Central Park. I lost sight of the boat, turning left at the end of the street. Looking at the clock above the front door, I noted the time down as half past two.

“John! Please, tell me why were you so late?” My secretary gave an angry look that, to me, made her look like a sad puppy.

“I just over slept; no big deal. I’m sorry, but right now we need to work.” I started to put my hat and coat on, adding, “I need you to call Garry. Tell him to, what do they call it, cross reference, the number of an x mechanics model robot, RF218.” I gave her a boyish grin, as she reluctantly sat down, muttering under her breath.

Shutting the door, my mind raced. Where to look first?

On the damp pavement once more, I headed down the road towards Central Park, then heading left at the end of the street. I didn’t find what I wanted to. With a sigh, I continued on the road. It took me half an hour to make it to the nearest over water tram station. When there, I took the next tram to the docks. It was Mr Jackson who I had set my sights on.